On World AIDS Day, December 1, 2011 in Richmond Virginia, Fan Free Clinic, now known as Health Brigade, organized a citywide HIV/AIDS awareness event displaying a human AIDS memorial ribbon 80’ X 150’.  Created by 400 people holding red umbrellas, the ribbon formation lasted for 9.5 minutes to signify the rate of new infections in the US.  The goal was to recharge the public HIV/AIDS discussion saying, “Thirty Years is Too Long.” (2011 marked 30 years since the first case of HIV/AIDS was diagnosed.) Standing in a sea of red umbrellas, we remembered the friends we lost yesterday, the people living with HIV/AIDS today, and the ones who will be lost tomorrow. We reminded our neighbors, near and far, that HIV/AIDS has been with us for 30 years and the fight is not yet won. Public relations efforts to promote this event won several awards and gained national coverage with a color photo above the fold on the front page of The Washington Post. 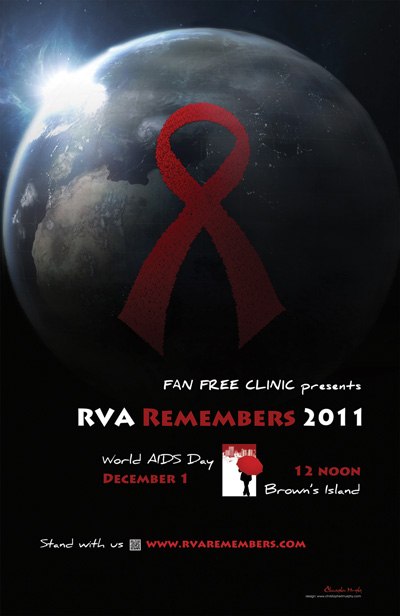 When all was said and done, local photographer Patience Salgado described it best,  “I could tell, each person there, the 400 holding umbrellas held a story…and when you are in the middle of 400 stories representing a million more people from all over the world, you are also standing in a very great love, one that is palpable and surreal…you start saying a quiet prayer in your heart that everyone could feel this—that the very person petrified to test would know this kind of love is waiting for them. And I know not every city can promise this, but my city can, because of the Fan Free Clinic.”